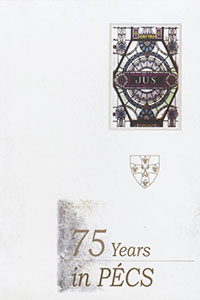 LECTORI SALUTEM he students of Pécs are proud of having a more than six-hundred-year-old university. However, the development of Universitas Quinque Eccelesiensis founded in 1367 broke in two first because of the war raging within the country, then because of the Turkish invasion as early as in the 15th century. Though the working of the university was discontinued for long centuries, the burghers of Pécs had never given up restoring the higher education. After several unsuccessful attempts there was a Catholic legal academy in the town /which has been an episcopal see ever since the establishment of the Hungarian kingdom/from the 18th century on. After World War I the Erzsébet University of Sciences of Bratislava was settled over to Pécs, which made it possible to start the university-level-education in the town anew from the academic year of 1923/24 on, namely at three faculties - philosophical, legal, and medical. Between the two World Wars legal education began to develop rapidly. The professonial staff settled over from Bratislava and completed by the professors of the Eegal Academy of Pécs created a high level education within a short period of time. Some members of the nationally acknowledged teaching staff received recognition even abroad. The importance of Law, however, was undervalued in Hungary after World War II, which fact had its effect on the legal education as well. Politics intruded into the premises of the university: professors and students not committed to the prevailing ideology, entirely suffered undeserved prosecution. The Legal Faculty has tided over the tempests of history and politics in such a way that it has been able to remain identical with itself. The opinion about the role of the state and the law has often changed in the past but it has not staggered the functional basis of the Faculty. It was able to maintain its independence even in the most crucial period, namely in the era of the theories on the decay of state and law. With the knowledge of these facts, we can proudly declare that during the past decades it has been this faculty that has preserved most of the traditions of the University. At the beginning of the nineties a fundamental change had come about in the social and economic system of Hungary: “the building of socialism" was replaced by the change-over to market economy, as well as the constitutional state and the striving after the European integration. After the change of regime the prestige of the legal profession was soon upgraded. At present legal education takes place at nine faculties and institutes /instead of the former four/in the country. While at the beginning of the nineties our Faculty had barely one thousand students, there were more than three thousand students enrolling for the academic year of 1998/99.
Kategóriák: Egyetemtörténet, Jogtudomány
Tárgyszavak: Jubileum
Formátum: OCR szöveg
Típus: könyv